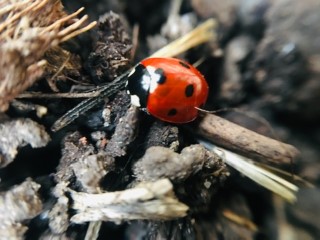 Is a ladybug male or female? The word Ladybug brings to mind a female insect. It makes us think that these bugs are an all-female gender. If so, then how could they survive in this world and how would they reproduce?

With all of these burning questions, let’s look at what this is all about.

Are Ladybugs Male or Female?

Ladybugs exist in both genders, male and female. There are ways of distinguishing between the two. Males are generally smaller and thinner, and may have longer antennae. Females are more round, with flatter undersides and fewer tiny hairs. Other differences may require a microscope to see.

So they may look the same to the naked eye with a few subtle differences that can be identified. Many of the differences though need to be viewed by looking through a microscope.

So, contrary to the name ‘Ladybug’, which depicts this insect as female gender only, it’s actually true that both genders exist in this family of insects. One thing you might like to know is how to tell the different genders so you can identify them better when you come across a ladybug.

Let’s look into it in more detail.

Do Male and Females Ladybugs Have Different Spots

The number, shape, size, and location of spots on a ladybug nothing to do with the gender of the insect. In fact, the spots on a ladybug are simply part of their genetic makeup, and also help to act as one of their five defense mechanisms to help keep predators away. Both genders use their coloring characteristics to survive in the world.

You can read more on what the spots on a ladybug actually means through my article What Do the Spots on Ladybugs Mean, How They Got Them and Why.

However, the number, shape, and color of the spots on their bodies change from species to species. Remember that the species of the ladybug cannot be predicted just by the number of spots on its body. There are many species that have a different number of spots.

There are many other factors too, such as shape and color of the body which help determine the exact species of the ladybug.

One thing is clear, the number of spots on the ladybug does not denote whether it’s a female Ladybug or a male Ladybug.

According to the above, a male and a female will have the exact same number of spots, color, shape, and size – assuming they’re from the same species.

The above image is a native Seven spot Ladybug I found hibernating on his own, so how I was able to tell he was likely a male? If it’s the spots, then how can you tell the difference between a ladybug male or female?

Here’s how to identify a ladybug male or female…

How to Tell the Sex of a Ladybug

Male and female ladybugs both have a lot of similarities between them. It’s a bit difficult to tell them apart just by looking at them in your garden

Of course, an obvious time would be whilst they are actually mating. But otherwise, one way you can usually tell between the two is by looking at their sizes. This is easier when you see a male and a female side by side.

The female ladybug tends to be slightly larger than its male counterpart. Further, in certain species, the male ladybugs have slightly longer antennae.

An example of this kind of species is the ‘Asian Lady Beetle’ also called the orange ladybug. You can read more on this species of ladybugs in my article ‘Orange Ladybugs – What They Are. They May Not Even Be Ladybugs’.

Although it’s difficult to differentiate between a male and a female ladybug just by looking at it, it becomes much easier to do under a microscope. Here are a few characteristics which show up in the two genders once you put the ladybugs under a microscope.

In fact, sometimes it helps to be an Entomologist (An Insect Expert) or Coleopterologist (a Beetle Specialist) to understand the differences, but try the exercise anyway and you should be able to spot some of the differences in certain areas.

So, it shows that although both genders of ladybugs have a lot of similarities, you can also identify quite a few differences once you examine them more closely. Find out much more about Ladybug Anatomy.

Identifying the gender of Ladybug Larvae is extremely difficult, mostly as they’ve not yet fully developed their sexual organs as they’re not needed until adulthood.

When ladybugs are mating then it is much easier to tell. The male will mount the female from the rear as the image below shows. You may also be able to see that the female is slightly larger in size and more round in shape.

How to View a Ladybug Under a Microscope

For more details, it’s a rewarding exercise to view a Ladybug under a microscope – even if it can be a little scary looking at these creatures up close. If you want to do that then there are a few hints and tips I can provide for you.

Are Orange Ladybugs Male or Female?

If you see an orange ladybug it’s likely to be a male or female Asian ladybug. The differences are generally the same as other ladybug species. Females will be slightly more round and possibly larger, while males are usually more elongated. You can identify most other subtle differences more easily under a microscope.

Are Red Ladybugs Male or Female?

Regardless of the color, all ladybugs species are either male or female. Whether it’s orange, red, black, or any other color. Red ladybug males tend to be smaller, and longer, while red female ladybugs tend to be more rounded and larger.

To provide an answer further, let’s provide the same information for yellow ladybugs male or female…

So Are Yellow Ladybugs Male or Female

Yellow ladybugs are either male or female. Male ladybugs will usually appear slightly smaller and longer, while female ladybugs will generally be more round and larger. This may give you a good clue as to the gender of the ladybug. For most other differences you ideally need a microscope.

Do you think there are more male ladybugs than female ladybugs or the other way round? Let’s find out more about this…

Are There More Female Ladybugs Than Male?

There is no evidence to suggest there are more female ladybugs or male ladybugs in the world. Both genders mate and reproduce

There are four stages in the ladybug life cycle; egg stage, larval stage, pupal stage, and adult stage. Both genders of Ladybugs could be produced through a single mating session of the adult Ladybugs and evidence suggests birth rates provide an equal or near equal ratio of male to female.

Now that you know there are both genders of ladybugs that exist in this world, do you think the male ladybug overcomes the female ladybug in any way? Read on to know more about this.

No, the gender of the ladybug has nothing to do with how aggressive or harmful the insect is. In fact, Ladybugs are pretty harmless creatures and don’t usually leave any lasting effects on humans. They mostly prey on insects, mites, and aphids. There is no difference between the two genders in how they locate or eat prey.

Ladybugs can be male or female, and there are some ways of telling with the naked eye, but to be more accurate you would need to look under a microscope. And it helps to have some knowledge of where to look – but you can learn.

I hope you found this useful, I’d encourage you to carefully study a Ladybug next time you find one, and see if you can tell the difference – as best you can. Also, don’t forget to check out the Green Kid Crafts page below for hands-on learning.

What is the name of a male ladybug? A ladybug, whether male or female is called by the same name, and this has nothing to do with its gender.

How many eggs does a ladybug lay? The mother ladybug could lay anywhere between ten to fifteen eggs. She makes sure that she lays the eggs in a place hidden from predators, and where her offspring can find food after hatching

What time of the year does a ladybug produce eggs? After mating in May, a Ladybug produces eggs between spring and early summer. She can carry the male sperm around for up to three months before deciding to lays her eggs, which they usually do on the underside of leaves.