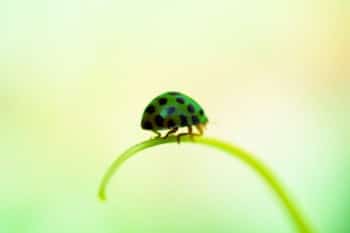 Ladybugs come in many colors, as well as different sizes and shapes, and when you find one it can seem like such an unusual type, particularly if it’s slightly more rectangular in shape than most ‘round’ ladybugs. So what about a green ladybug?

You’d be forgiven for thinking you’ve found a cute green-looking little spotted or striped green ladybug. And you did the right thing in trying to understand more about it. Nature is not always as obvious as you might think

So I’ve looked into this further and can share my findings. I hope it helps!

What is a Green Ladybug? Ladybugs fall within the Beetle Family Coccinellidae. Within this family, there are no records of green-colored Ladybugs. So sadly it’s not a Ladybug. The most likely Beetle could be a member of the Chrysomelidae family, commonly known as the Cucumber Beetle.

Ideally, to know for sure we need to look at all the options.

So what do we know about actual Green Ladybugs?

So, as mentioned, there are no actual Green Ladybugs within the ‘Ladybug Family’. But new discoveries are being made all the time, particularly in such a large area as the insect world, so we can’t say there are definitely none, or that there will never be any.

All we can say for sure is that there are currently no reported official sightings of specimens of Green Ladybugs – I know, it would be super if there were!

Nature can play all kinds of tricks on us. An emerging ladybug just out of the Pupa stage may not yet have its final identifying colors and often no spots have developed either.

In the right setting, they may appear to be either a yellow color or even a very pale green color. Green Ladybugs in this form will have no spots, and will not be like this for long, usually no more than 24 hours.

After that time its shell will have dried out and hardened into the natural color it will be throughout its adult life. The spots will also have appeared by that point too.

And if you see a spent pupa casing nearby then it’s more likely to be this so it’s worth looking more around where you found the Ladybug, particularly under leaves to see if you can find the spent pupa.

There are plenty of colorful ladybugs around, there are even more colorful ones on the internet. So, we have to be wary when someone shows us a green or other colored Ladybug.

This is because Ladybugs have been subject to photoshop artistry for a number of years now, and even the odd hoax here are there – most notably the ones regarding Purple Ladybugs.

Here’s one I made myself from a stock photo. There are plenty of others you can find, or maybe have a go at making one yourself!

So What Is This Green Ladybug?

As you’re probably looking at one right now or saw one. So let’s talk about what else that particular green bug might be – so we can identify it for you.

There are a few ‘Green Beetles’ around which might match the one you have in mind – or in view. So let’s discuss those, then we’ll move on to what the most likely candidate is.

Here are some other varieties of green beetles that could be what you mean, or that you can look out for in the future. So, starting with the least likely Green Ladybug candidates first…

Seen from around May till wintertime they’re bright green, angular, flat-shaped beetles that emit an obnoxious stink when disturbed.

Again an unlikely candidate to make you think it’s a Ladybug, but I included it just in case.

The figeater beetle is often mistaken for the June Beetle as they can look fairly similar to the more western cousins. Scientifically known as Cotonis mutabilis, and known as the Green Fruit Beetle or Fig Beetle.

The Figeater beetle can be a brighter green, can grow to approximately 1.25 inches (3.2cm), and are active during the day, often preferring the shade.

They will often eat the fruit from cactus trees as well as sap from desert trees.

Since the growing popularity of composting. Home gardens and mulch since the 1960s, they’ve spread fairly rapidly and can be found over many parts of the Western United States, often where the climate is quite moist and rotting vegetation or mulch is more abundant.

You would probably not recognize this as being a Green ladybug.

Typically around 12-13.5 mm in length. Adults are bright green in the spring and summer but nymphs have darker patches and of course, are generally smaller. Resembling more of the Ladybug shape.

Shield Bugs and Shield Bug Nymphs are fairly common throughout the northern hemisphere and fairly easy to identify. They’re known as Shield Bugs in Europe, and in North America, they could be compared with the Stink Bug.

They can be found almost all year round except in winter months in and around many habitats, including fields, gardens, and parks.

A remote candidate for being mistaken as a Green Ladybug, but let’s start with this. The Scientific name; Cotonis nitida, also known as the June Bug, or June beetle. These belong to the family Scarabaeidae. Mostly found in the Eastern United States and more so in the South, but have been seen as far west as California. Often mistaken for the figeater Beetle which is next on our list.

You’ll see them during the day and they’re quite large, the adults are about an inch long, 15-22 mm so that would be some sizeable Ladybug!

It has a dull metallic hue to the body which gives a green impression.

Their Larva feeds mainly on mold and hummus but they can seriously damage the root systems of plants and vegetables. The adults appear in June (of course) and will begin feeding on Fruits, mainly grapes, peaches, berries, apples, nectarines, pears, and figs.

These are a little more likely to catch your eye as a possible Green Ladybug. Gastrophysa viridula, also known as the Green Dock Beetle, Green Dock Leaf Beetle, and also the Green Sorrel Beetle.

Found in central Europe right through to Siberia in Asia.

Photo by Egor Kamelev from Pexels

Their natural habitat is forests, heathland, gardens, fields, and meadows – anywhere there is a plant dock, which is this beetle’s chosen food source.

If it’s none of these, then we’re left with the main possibility of the Spotted Cucumber Beetle – which is the most likely candidate. Let’s take a look at that.

The Spotted Cucumber Beetle (The Most Likely Green Ladybug)

The Cucumber Beetle is not part of the Ladybug family, green, through to yellow in color with 6 large black spots on each side or three stripes down the body, and looks very similar to many Ladybug types.

The main difference you’ll see is that their antennae are longer and thinner than Ladybugs.

Their bodies are generally the same size 0.2 inches (0.5mm) in size, but generally longer and more ‘oblong’ in shape than your average ladybug and they feed only on vegetation.

These are pests, native to North America, and during their short lives (around 8 weeks).

They will happily eat their way through your crops and/or garden vegetables and plants mainly feeding on the stems and roots of plants as well as other parts like buds and flowers.

They can destroy crops of Cucurbita-type vegetables, which include squash, zucchini, and gourds. and pumpkins. As well as watermelon, cucumbers and various melons.

This is definitely not a Green Ladybug I’m afraid!

Cucumber Beetles Are Not Always Green

Some can even appear orange or have no spots or stripes, some have stripes and with some, it might be difficult to tell if they had either.

Their habitat is very similar to that of Ladybugs, but whereas Ladybugs are there mainly for Aphid colonies, the Cucumber Beetle is there for vegetables. So you will find these in your gardens and crops – mainly around Vegetables like Cucumbers (of course).

Why We Think It’s a Green Ladybug

Both the Spotted and Striped Cucumber Beetle has similarities to Ladybugs that would make them appear to be Green Ladybugs, it’s similar in size, and similar shape, and like all beetles, they have six legs.

Its habitat is also similar to that of Ladybugs, and its larvae are of a similar type to many Ladybugs found in common gardens and fields.

Because they’re not green ladybugs there is no special meaning attached to them from a Ladybug Point of View, the only meaning we can attach to green ladybugs is that you’ve either witnessed a recently born Ladybug – which in itself is good luck! Or that you have a different type of green beetle in your garden.

For all the Ladybug meanings, head over to my other article on What Ladybugs Mean, in Love, Luck, Signs, and Symbols.

Although, it’s not unheard of for other beetles to be symbols of sacred meaning. Scarab beetles were revered by the Egyptians as a religious sign of protection, resurrection, immortality, and transformation

There are millions of types of beetles out there, so naturally, I’m not able to name all the green ones here. If you take nothing else away from this then let it be that there are NO actual green Ladybugs, but there are a variety of other green beetles that might be mistaken for one. I hope it’s helped.

Are Green Ladybugs Poisonous? The Cucumber Beetle, which is commonly mistaken to be a Green Ladybug is not poisonous. However, they do carry and transmit a natural bacterial fungal disease called Erwinia tracheiphila or ‘Wilt Disease’ which can harm vegetable crops.